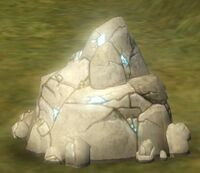 Azurite is a common mineral found in stones around the kingdom.

A semi-precious gem that is quite easy to cut. It is commonly used in jewelry and dyes. Alchemists also use it in potions as it acts as a catalyst for certain magical and chemical reactions.

Also "a Gem Deposit" and "a Rich Mineral Deposit" sites can give Azurite x4 as a random result.

Used in the philosopher's stone and in crafting higher level staves

Retrieved from "https://thesimsmedieval.fandom.com/wiki/Azurite?oldid=22019"
Community content is available under CC-BY-SA unless otherwise noted.