Dueling is the practice of resolving disputes or offenses by combat. It is the main form of combat in The Sims Medieval and is only performed with swords. Only Knights, Monarchs and Spies, as well as certain NPCs (including children) can perform these actions.

There are two types of duel, one which is considered a "normal duel" and one "to the death", in which one of the duelers will almost certainly die (or be grievously wounded). Both will negatively affect the relationship between the sims. In addition, sims can have a friendly sparring match, which is not done out of anger and will in fact improve their relationship.

To begin a duel, the challenger throws down a glove, which is picked up by the other sim who then slaps the challenger with it. Sims cannot decline to duel when challenged unless they are cowardly. Cowardly sims also must accept when pressed but may refuse the first time. After the challenge has been issued, both sims will change into their armor and draw the swords, and both their health and stamina will appear in the upper left corner of the screen. A duel ends when a sim runs out of health; running out of stamina leads to an inability to move and quick defeat.

Although attack and defense are automatic, there are some actions that the player can take part in: the fighting stance and special moves.

The fighting stance sets the balance between attack and defense, and is selectable under the sim's portrait.

Special moves are selectable when clicking on the sim's opponent. They drain stamina but will also give a good blow to the opponent, although they can fail. Also, special moves have a cooldown, meaning that a particular special move can't be used immediately after it was last used. Examples of special moves include the hilt smash, the whirling takedown, and the mortal blow.

The success or failure of attacks, defenses and special moves is determined by various factors: the Sim's level, the armor he/she is wearing, the weapon he/she is carrying, the condition of said weapon (sharpened or unsharpened) and the focus level.

The duel will end once one sim runs out of health or stamina. If the Sims were fighting to the death, the loser will die of their injuries. If it was a normal duel, the loser will be injured, more or less severely. Sparring will not usually see the loser injured.

Children can also duel other children. When dueling, children use toy swords, but the techniques and animations they use are identical to adults. Children will never duel each other to the death, as they can not be killed by any means. 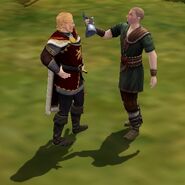 Add a photo to this gallery

Retrieved from "https://thesimsmedieval.fandom.com/wiki/Dueling?oldid=22331"
Community content is available under CC-BY-SA unless otherwise noted.