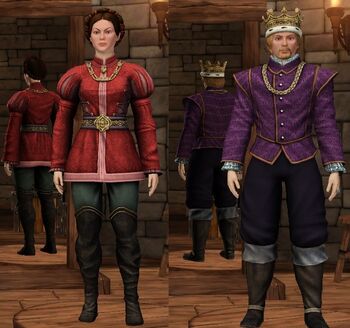 In The Sims: Medieval, the player may create both male and female Sims for any profession. Departing from the medieval setting, men and women are treated equally, with gender only effecting a few minor aspects of gameplay. Many outfits and hairstyles are gender specific. Marriages between the same-sex can occur as their is no restriction against it.

Hero Sims can have both a son or a daughter. But can be influenced by eating Turnip Soup for a girl and Apple's for a boy. Only certain way for an unmarried Monarch to get a boy or girl is to take the mission Heir to the Throne, and choose the gender of the first child.

Unlike adults, children look and sound the same regardless of gender. ﻿ Despite this, there are many outfits and hair that can only be worn by one gender.

Retrieved from "https://thesimsmedieval.fandom.com/wiki/Gender?oldid=23829"
Community content is available under CC-BY-SA unless otherwise noted.