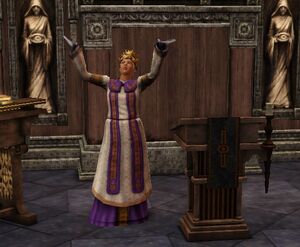 Jacobans are followers of the Jacoban branch of the in-game religion. They believe in a god known as the Watcher, who created them, watches them, and guides them. However, they believe that the Watcher is vengeful and merciless and thus must be feared and appeased by submitting to a strict moral code, lest It decide to punish them.

Accordingly, Jacoban priests work to drive fear and obedience into the hearts of worshipers by making intense sermons, putting up dire proclamations, and shaming Sims into absolving their sins.

The Gothic style of Jacoban cathedrals and the heavily-dyed and adorned clothing the clergy wears is notably awe-inspiring and expensive-looking. It's very likely most donations to the church only serve to fund further luxuries and lavish living.

Jacobans who socialize with Sims that aren't Jacoban will occasionally receive the "Feeling Superior" buff for awhile, granting them +10 Focus.

Jacobans will automatically donate 10% of their income to the Jacoban Church.

The Jacoban faith was started by a Sim named Jacob who was born in Yacothia, the Jacoban holy city. Jacob is believed to have spoken for the Watcher and is likely the first Sim to have talked about the Watcher at all.

Pilgrimages to Jacob's birthplace are relatively common. Pilgrims are required to wear Jacoban Neckerchiefs made from special cloth and twisted into the characteristic "knot of Jacob."

The Jacoban Church is organized by and run from the city-state of Yacothia. The absolute head of the church is the Jacoban Proxy, a Jacoban priest who has been elected to hold the position. The Proxy is said to speak for Jacob, who in turn spoke for the Watcher. At the start of the game, the Proxy is an old woman whose health is failing. It is possible for the Proxy to die from illness and need replacing, in the appropriately titled Death of the Proxy quest.

Another high ranking position in the church is the Great Convincer, who is likely in charge of making sure the church gets new members from conversions.

The High Priest(ess) is the person within the church who is in charge of politically running Yacothia and managing its diplomacy.

Various sub-groups exist within the church, two of which are known: "Jacob's Sword" is an order of paladins who wield Watcher's Blades and act as Yacothia's military while the infamous "Justicers" wield swords called Teeth of Jacob and are tasked with hunting down the church's most dangerous enemies.

Regular members of the Jacoban clergy are also separated by rank. The highest ranking priests are known as Eyes of Jacob (level 10). Below them are the High Shepherd(esse)s (level 5 to 9), priests who have proven their fear-mongering ability and can predict the consequences of posting particular proclamations. Below them are the rank-and-file Shepherd(esse)s (level 1 to 4).

The lowest ranking members of the church are the attendants of the priests, who clean the floors of the cathedral, write religious documents, and occasionally assists their priest with quests.

The secret Jacoban Vault deep within the forest...

The Mask of Jacob!

A new Proxy is elected! (quest Death of the Proxy)
Add a photo to this gallery
Retrieved from "https://thesimsmedieval.fandom.com/wiki/Jacoban?oldid=20852"
Community content is available under CC-BY-SA unless otherwise noted.