The Monarch is the ultimate leader of the Kingdom and the first of the ten classes of hero available, as their signature area - the castle's Throne Room - is the only one built when a new game starts.

The Monarch's main job is running their kingdom. This includes doing paperwork by writing laws and treaties, proposing and voting on edicts, holding court to listen to petitions by the villagers, sentencing Sims to a certain punishment in the Judgement Zone, and dealing with the rulers of other kingdoms.

Beyond making decisions and navigating politics, Monarchs are skilled fighters. Though most martial tasks and quests involving combat are handled by their Knights, Monarchs are nonetheless able to hold their own in battle. The monarch is the head and source of all powers in the land. The Monarch is the most favorable hero of them all.

Starting a New Kingdom with a Hero

After the current Kingdom's Ambition is achieved, there is a special quest (Brave New World) costing 0 QP which is available to start a new Kingdom with an existing Hero. The Hero can be selected when starting a new ambition and will appear in the same place as pre-made monarch at the Throne Room. Their rank from their previous profession will be transformed into their monarch rank. The imported heroes retain some of their previous profession abilities, e.g. a blacksmith turned monarch can still forge equipment.

A Male Monarch on his Throne

A Monarch hearing a subject's petitions

A Female Monarch in Create A Sim 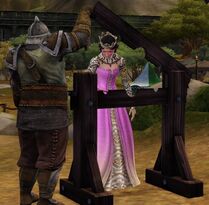 Monarchs can be arrested for crimes, too.

Community content is available under CC-BY-SA unless otherwise noted.
Advertisement