In The Sims Medieval, the player creates and controls Hero Sims, who are crucial to completing Quests. The Hero Sims gain experience and advance in level by completing these quests.

There are ten classes of Hero Sims: 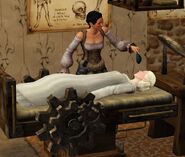 Add a photo to this gallery
Retrieved from "https://thesimsmedieval.fandom.com/wiki/The_Sims_Medieval?oldid=20266"
Community content is available under CC-BY-SA unless otherwise noted.